We have to say a big “Thank You” for the support of our Prime Sponsors for their financial contributions to help bring the Gorey Business & Endeavour Awards to a reality.
We look forward to many years of collaboration and continued success.

Robbie manages the business lending for Permanent TSB in the South East Region, with responsibility for lending delivered through 11 branches.

Robbie has extensive experience in lending to a variety of sectors developed over his 15 years in banking.

Robbie works with businesses to identify lending solutions to suit their needs, and to build longstanding relationships into the future.

Circa Design functions as both an architecture & construction company.

We provide an integrated service to maximise the potential of each project through our design & construction team. We realise that every client has a different brief and we work closely with you to understand your individual thoughts ideas and ideas in an efficient and effective manner. Our goal is to develop relationships with our clients to promote integration and communication throughout the design & construction process and beyond.

We work hard to realise your vision through our design service. Each design is unique to our client’s needs and specifications, whether the focus is on light, comfort, space or energy efficiency. As RIAI registered architects we ensure that your dream becomes a reality through constant communication, careful project management and continual assessment until the project reaches completion.

The SD Group operate a diverse range of leading and dynamic businesses, in varying sectors throughout Ireland and the UK. The company was established by entrepreneur and multi-business owner Seán Doyle in 1987, to collectively manage his growing portfolio of businesses and is headquartered in his home town and popular country-side holiday destination, Kilmuckridge in Co. Wexford, near  where  Seán  was born and rared in Monamolin.

We pride ourselves on delivering world class Hospitality, Painting and Scaffolding services and are actively involved in the acquisition, development and leasing of Property in Dublin and throughout the South East of Ireland. The company’s success is demonstrated through our extensive portfolio of internationally acclaimed and prestigious projects and clients across all industries.

SD Group Directors are Seán Doyle and Katherina Doyle. As owner and Managing Director of all SD Group businesses and with vast experience and expertise in each sector, Seán plays a vital and very hands on role in the speedy progression and development of each business venture.

The Group have developed a reputation as a forward thinking progressive company, with extensive industry knowledge and consistent delivery of quality and excellence for 30 years. 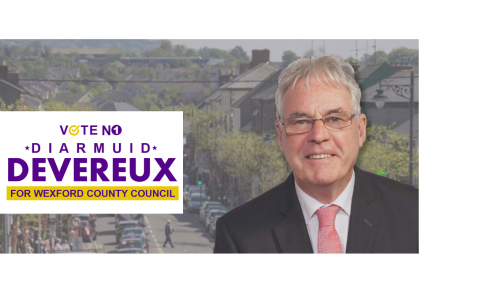 Diarmuid Devereux is a native of Gorey town. Originally from Coislinne, he is married to Yvonne Roche & they have 2 adult children & 4 grandchildren. Diarmuid and Yvonne live in Ballyoughter.

> Diarmuid served a five-year term as chairman of Wexford GAA until December 2016. During this time he greatly improved the organisation’s finances, reducing its debts by more than half.

> Diarmuid is currently Vice Chairman of St Aidan’s Services in Gorey which provides care for people with disabilities, special needs and the elderly.

> Diarmuid was appointed CEO of Gorey Chamber in 2017 and holds the position in a voluntary capacity.

Diarmuid is recognised as a straight-talker with a motivation which is results driven.

He can be trusted to represent the views of others and will always prioritise the needs of North Wexford and Gorey.